December 2017 Windstar Lines closes out the year with 120 motorcoaches and buses. We traveled over 5 million miles, a new record!

December 2014 Windstar Lines closes out the year with close to 80 motorcoaches and buses. In 2014, we traveled over 3.6 million miles.

May 2009 Windstar Lines is featured in National Bus Trader.

November 2008 Windstar Lines is delivered a 2009 ABC M-1235.
This 2009 M1235 coach has big coach features such as a restroom, DVD with a four monitor video system, large rear luggage compartment and a fine leatherette seating. Coach #044 is assigned to the Des Moines Branch.

September 2008 Windstar Lines provides 20 motorcoaches for the 2008 Republican Convention in Minneapolis.
Windstar Lines, Inc. provided 20 motorcoaches for the 2008 Republican National Convention in Minneapolis. From August 30th through September 5th, nineteen of the coaches provided shuttle service for delegates across the country from various points around Minneapolis to the convention site at The Xcel Energy Center in downtown St Paul. A VIP coach from Windstar Lines was used as the dispatch center for officials organizing all transportation for the weeklong event.

September 2008 Windstar Lines provides 13 motorcoaches for evacuations of Hurricane Ike.
When Mother Nature called in the form of Hurricane Ike, Windstar Lines answered. Thirteen coaches returned back to Iowa from San Antonio, TX on September 21st – they had been in Texas on call for evacuations, shuttling evacuees, military personnel, and state officials since September 7th for the state of Texas.

May 2007 Windstar Lines Cedar Rapids Terminal completed.
Windstar Lines moved into their new facility located near the Eastern Iowa Airport between Cedar Rapids and Iowa City. The facility houses offices, two service bays, and a wash bay. This replaced the temporary facility which was located in Iowa City.

February 2006 Windstar Lines becomes Department of Defense Qualified.
After a rigorous audit of our facility, equipment, and operations, Windstar Lines received a one rating (the highest rating given) by the military contractor Consolidated Safety Services, Inc.

If you have any questions about our history or want to get started on your next trip, contact us today! We're happy to serve you! 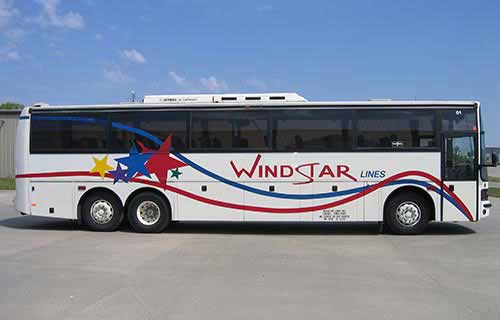